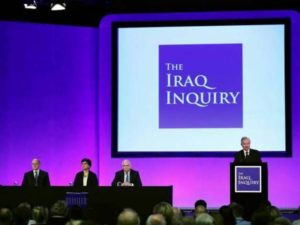 In 2009, when the UK withdrew combat troops from Iraq, the UK government began a public inquiry to consider what happened with UK involvement in Iraq from 2001 through mid-2009. The Report of the Iraq Inquiry was published July 6, 2016.

A public inquiry is generally supposed to identify institutional missteps that resulted in a bad outcome, and to make recommendations for how to redesign laws and institutions to improve future outcomes.

Glen Rangwala of Times Higher Education argues that the Report of the Iraq Inquiry is so wordy and abstract that it does not succeed in the typical purpose of a public inquiry, but that it is a powerfully resonant work of academic analysis.

What do you think? Skim the report, and let the law library know on Facebook or Twitter what audience you think is well or poorly served by the report and why.